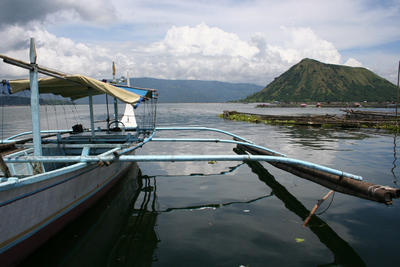 Three weeks and I was already beginning to feel sufocated by Manila. So Mailah, who has been helping me get my apartment and life set up here (she’s also a producer at the network), knowing I wanted to get out of the city and see something different, suggested we join her friends for a day at Taal Lake in Batangas. The lake is surprisingly close to Manila — maybe an hour drive away. This is surprising because the area is very green and isn’t covered in a dense fog of diesel fumes.

The lake is known for a volcano that sits on an island in the lake. It’s an active volcano, but on a nice day you can hike to the top and peek into the crater. Inside the crater is another lake. I invited Juliana, my Princeton in Asia partner in crime here in the Philippines, to join us. Juliana and I wanted to hike to the top, but when we decided to walk around for a while to explore, we realized that probably wasn’t the best idea. After about 10 minutes of walking, we were both drenched in sweat.

But before that, our hosts took us out into the middle of the lake to watch them catch our lunch. There are a bunch of fish farms in the middle of the lake — which are really just floating bamboo structures with nets under them to keep the fish from escaping. The fishermen pull up the nets to bring in the day’s catch.

We really didn’t do much that day, except eat. Later we took the boat back to the shore to get ready to leave. Walking around a bit (again, in the heat and humidity), we were surrounded by fields and palm trees. It made me remember that I am, in fact, on a tropical island — something that’s easy to forget in the middle of a city like Manila.

More of my photos from Saturday’s trip are posted here.