A couple of weeks ago, I was invited to join my friends Karen and Mailah for a weekend in Cebu, the Philippines’ second largest city. Although it is sort of a big city (the population is under one million, so I don’t buy the whole “big city” title), it is also very close to beaches, and does not have the permanent haze that makes Manila look like it recently had a nuclear bomb dropped on it. Karen was working as an emcee at a conference for doctors, so we got to stay at the Shangri La on Mactan Island for free! I wouldn’t even stay at a place like the Shangri La if I were making a U.S. salary, let alone on my Philippines stipend.

The resort was beautiful, but it had an interesting feature. Because the sand on Mactan Island is black, and the resort’s executives decided they wanted their visitors to experience the famed white sand beaches of the Philippines, they imported sand from another island and plopped it down in front of the massive resort. Forget the fact that it’s not indigenous to that island. The plan to import sand angered a few environmentalists, as it rightly should have, but it doesn’t seem like anyone truly cared, since the Shangri La got its way.

But the best part was that this whole story was related to me as if it were completely normal. Only in Asia… 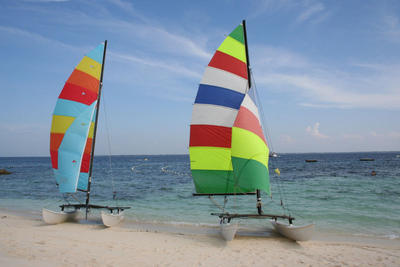 When Karen and Mailah left for Manila Sunday, I stayed in Cebu and bought a ticket to Bohol Island. It’s one of the major islands in the Visayas, famed for its “chocolate hills.” Instead of heading to the island’s main tourist attraction, I went straight to Panglao Island. Another ABS-CBN employee had told me about Alona Beach on Panglao. She said that although it’s mainly a dive resort, it’s also incredibly beautiful and a great place to hang out for a few days. She gave me the number of a German guy, Holger Horn, who runs a dive shop, and told me to contact him when I got there — he would hook me up with acommodations or anything else I needed, she said. (Connections are a HUGE thing here.)

Holger ended up being quite helpful, and told me a bit of the history of the area. Up until about two years ago, fishermen on Panglao would throw dynamite into coral reefs close to shore to “catch” fish. Obviously this did a great amount of damage to the coral and everything that lives in and around it. Holger helped turn the area into a marine sanctuary, and now there are dive shops that dot the beach. Although I’ve been told that there are beaches in the Philippines that are much more touristy, Alona had its share of foreign visitors. And rightly so. It is a magnificent place, and it boasts a real white sand beach. 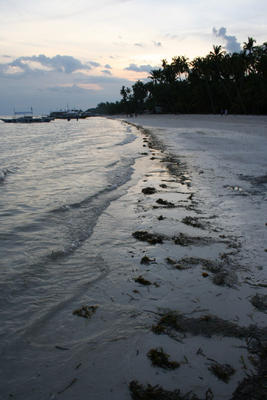 I didn’t get to go snorkeling — the really good snorkeling is another boat ride away to yet another island — and I only had a day. I ended up laying around sipping mango shakes. But even on Alona you can walk out about 10 feet from the shore and see some small fish, red and black starfish and some spiky looking sea creatures.

This morning (Tuesday) I flew back to Manila from Tagbilaran on Bohol, from what is probably the least secure airport I’ve ever seen in my life. I usually am annoyed by the almost too thorough bag searches at U.S. airports — and how you practically have to take off half your clothes before going through the metal detector. But now I think it’s actually comforting to have to go through the airport security ritual, especially after seeing the Tagbilaran airport, where two security guards open your bag, poke through it a bit, and then let you board the plane. That’s it. No x-ray machines, one metal detector, and I’m sure they didn’t rip open those taped up boxes that were being loaded onto the plane with us. No wonder most airports here have shrines to the Virgin Mary where you can make your (final?) offerings.

But when I got back to Manila, I was so relaxed from my three days on the beach that even an hour and a half taxi ride to my place in terrible traffic didn’t stress me out.