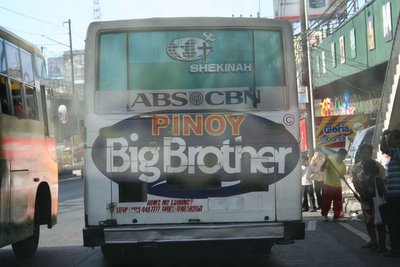 American cultural imperialism at its best. Except that I read somewhere that the Big Brother show started in Europe. It’s good to know we’re not the only ones spreading mind-rotting reality TV around the world.

Pinoy Big Brother, broadcast by my host organization, is really popular here. It even has its own catchy theme song that I hear everywhere. (And other PIA fellows work for NGOs that try to do things like protect the environment, increase literacy and stop the spread of HIV/AIDS. I, on the other hand, get to do much more important work — like wander the halls of a media conglomerate that broadcasts the Philippines very own Big Brother.)

Other American reality programs — especially The Apprentice — are extremely popular here. At a baby shower last weekend I was completely left out of a conversation, not because of a language barrier, but because my hosts were having a very detailed discussion about The Apprentice.