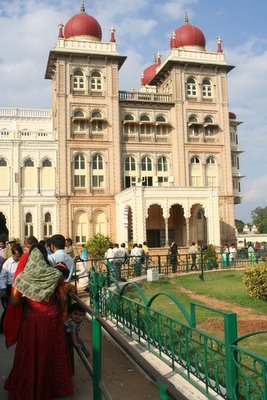 On Christmas Eve I arrived in Bangalore with my friend Judy. We had been planning the trip together for about two months, but I had been planning it in my head for about a year — ever since I found out one of my college roommates was getting married in India. We arrived at night and quickly (and relatively easily) made our way to the hotel that would be our home base for the next week. The five-star Leela Palace — a hotel I would never have been able to stay at without the help of a group discount and four people crammed into a double room — would also be the location for four days of wedding events. (Let’s just say the hotel lived up to the “palace” part of its name. I’ll post photos in a future post.)

We had seen nothing of Bangalore yet — except our hotel room that had plates of brownies and bowls of fresh fruit laid out for our snacking pleasure — but I wanted to get out of town before the wedding celebrations began. So Judy, Anu and I hired a car to drive us three hours to Mysore, a place I had been told I had to see if I was going to Bangalore.

I was lucky to have two friends with me in India. I knew I would be busy with wedding events, but I also wanted to travel, and India just seemed a little too daunting to explore alone. Judy is a former PIA fellow. Eventhough we both grew up in Nevada, living only about an hour away from each other, we didn’t meet until both of us were living in China. Anu is a friend from NYU. She wrote to me about a month before I was planning to leave to tell me she was also going to be in India visiting her family. She wanted to see the wedding.

The car ride seemed particularly long, crammed into the back of a Tata, the ubiquitous car brand seen all over the country, rivaled only, it seemed, by the Ambassador. Our driver seemed to be trying to get in a head-on collision with almost every vehicle we passed. This didn’t really surprise me — enough travel in Asia and you start to wary of the crazy driving. It becomes normal. Our first stop on the highway: Cafe Coffee Day. The coffee shop seemed to appear out of nowhere on the road between Mysore and Bangalore. We were at first skeptical, hoping to go to places that we thought would be a little more “local.” (By the time the trip was over, realizing it was India’s version of Starbucks, we happily sipped their lattes and ate their chocolate covered espresso beans.) Instead, we found a place to sip fresh pineapple juice.

It was mid-afternoon when we reached Mysore and we went directly to the Mysore Palace, a stunning work of architecture surrounded by gardens. We were not the only ones there to appreciate it. After taking off our shoes, the three of us filed in slowly, corraled through hallways and rooms decorated in a distinctly European style with hundreds of other people. Halfway through we noticed a group of young men that went where ever we went. We would stop, they would stop. We would walk faster, they would walk faster. We finally lost them when we walked toward a separate part of the palace, and then quickly found a way out.

Our driver met us at the gate, and asked us where we wanted to go next: The market. He said it was closed, but dropped us off in a commercial district of the town. We wandered a bit and found an open air vegetable market. I, for one, was mesmerized by the colors. I didn’t realize I would see many more markets like this one in two and a half weeks in India. 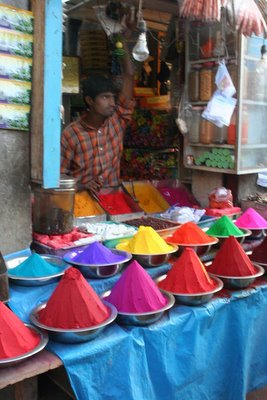 Back on the street I was unable to focus for very long on one thing: Motorscooters whized by, children sold armfulls of flowers, old women sat on the street selling fruit, people hurried down the sidewalk with bags of goods from the market. 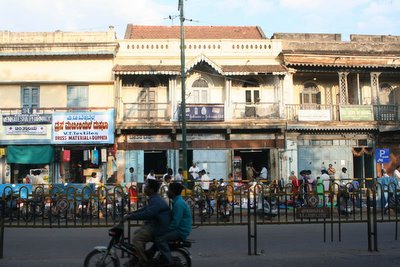 Still somewhat mesmerized by the activity around me, we made our way back to the car. We started to drive back to Bangalore, but we stopped our driver in time to make a quick trip up Chamundi Hill. Monkeys wandered on the side of the road with the vendors. Cows lounged in the middle of the road.

Back at the Leela, we decided to relax. We had been warned that the wedding was going to be a non-stop four-day party. I wasn’t so sure that was possible, but I took their advice and we all tried to go to sleep early. Good thing we listened. The next four days of dancing, eating, drinking — did I already say eating? — would test my abilitiy to get by on no sleep more than any time I’ve experienced since I wrote my honor’s thesis my senior year in college.