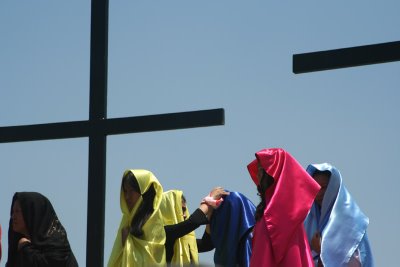 In the spirit of blog posting, I’ve decided to finally post my photos of the Good Friday reenactment of the crucifixion of Jesus Christ. When I decided to move here, one of my friends in the states told me she knew two things about the Philippines: 1) Imelda Marcos has lots of shoes, and 2) that’s the country where people volunteer to be crucified ever year with real nails. I knew I had to see both the crucifixion and the shoes. (One down, one to go.)

One of my friends from work is from a town near San Fernando in Pampanga — right near crucifixion ground zero. He had always been too afraid to watch the actual crucifixion. As a kid, he ran and hid behind his mother when the shirtless penitants with bloody backs walked by his house whipping themselves. So he had no desire to see it now, 20 years later, with the crazy American. I eventually convinced him with my enthusiasm for all things historical — including reenactments that draw blood. (They volunteer, so what’s the harm?) 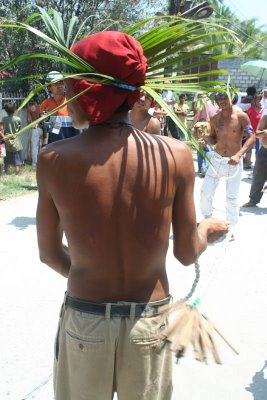 I think Good Friday 2006 in Pampanga was the hottest day I have ever experienced. Hot, humid, no shade. We sluggishly made our way through crowds of penitants, tourists and locals who were hanging out by the side of the street, watching the yearly procession. The event can be divided into two parts — the procession of the penitents whipping themselves and the actual crucifixion in a big field in front of thousands of people and TV cameras. 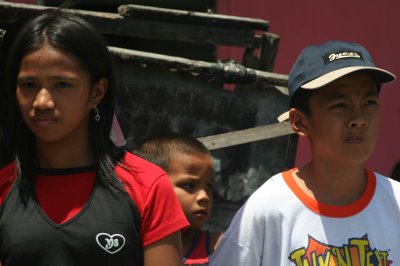 Although it would seem like the crucifixion would be the most dramatic part of the day’s events, the first, more bloody part sort of knocks the wind out of the sails of the crucifixion. The shirtless men sacrificing their backs line up on a narrow street. They whip themselves with bamboo pieces attached to a rope. For a long time they just whip and whip and nothing happens. Once in a while I had to dodge a whip or two — the street is very narrow and with all the people it’s difficult to avoid the flying weapons/torture devices. Then the Jesuses start to arrive to make their procession to the field where they will be affixed to a cross. 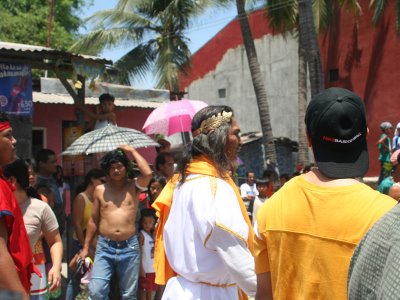 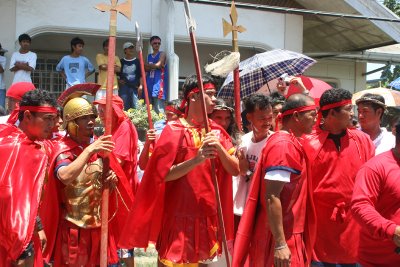 In the hot sun and the crowd, the procession feels very, very long. And then suddenly you have to start ducking for cover. Backs start getting bloody and the blood starts flying. 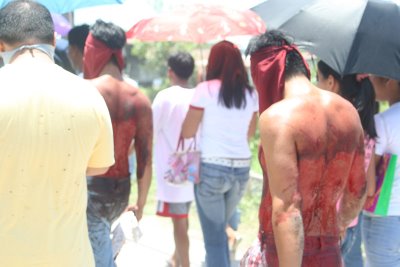 (That’s also apparently when I forgot how to use the meter on my camera.) 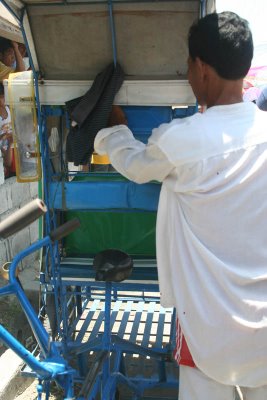 The tricycle driver wipes the blood off his tricycle. 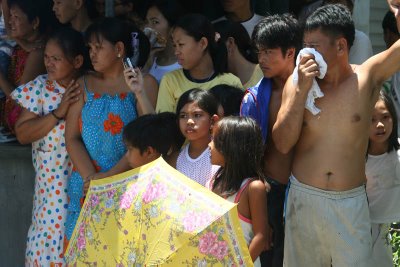 When we got to the field, what seemed like thousands of people were already there, crammed into a sort of pit area for spectators. Photographers and cameramen sat on a raised platform, a bit above eye-level from where the Jesuses would be crucified. The crosses were on a raised mound above where we were standing. With so many people wrangling for a photo of the Jesuses as they were crucified, it was difficult for me to get my own photos, but I managed a few. 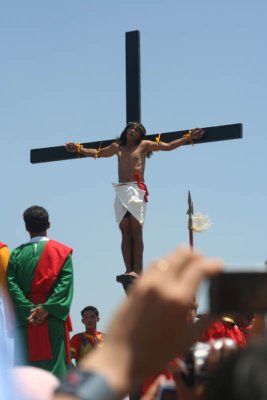 The Jesuses don’t actually stay crucified for very long — maybe just a few minutes. And there’s a platform built into the cross for them to stand on, so the weight of their bodies doesn’t cause more damage to their already injured hands and feet. 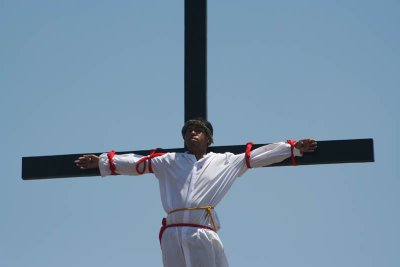 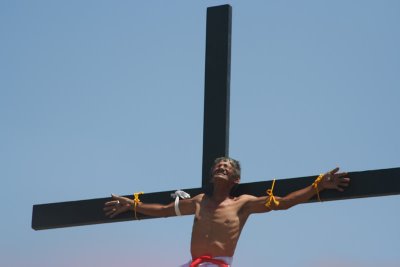 Throughout all the crucifixions, my friend kept talking about “the white guy” that was supposed to be crucified. He was really just there to see the white guy. When we were about to collapse from heat stroke and dehydration, we finally left. We didn’t get to see the white guy, but I read about him later, and it turns out that he was there but didn’t go through with it. He was a news anchor from the UK who was making a documentary called “Crucify Me.” I guess the documentary didn’t exactly end the way he intended.