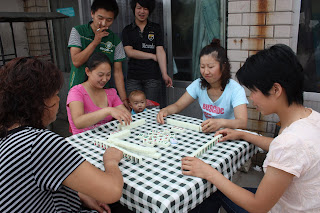 Now that Flickr is finally unblocked in China, I’ve posted a bunch of photos I took on a walk with my friend Marco (visiting from Shanghai en route to Italy) from our hotel to the Dandelion School. Every day the students and I take the bus to school because the walk is long, the weather is hot and the sidewalk-less road is dusty. People were curious but friendly as I walked around like a tourist with my camera. The walk is not what I would call pleasant, but it was a fascinating tour through a predominantly migrant neighborhood. This is where the people that build Beijing’s skyscrapers and sweep its streets live.

The first day the DukeEngage students and I arrived at the Dandelion School we were put to work with a team of dentists who were volunteering their time to examine the mouths of 600 students. At lunch we were fed the same food Dandelion students eat every day: stir fried vegetables, a tiny bit of meat thrown in, and nutrient enhanced rice. The school doctor told us not to be scared of the yellow-orange pellets mixed in with the otherwise normal looking rice — that’s the added vitamins. I eat the rice every day now, and hardly notice the little pellets in my food.

NPR broadcast a story about the nutrition program at the Dandelion School about a week and a half ago. (It’s amazing that I work at the school, but found the NPR story a week and a half after it was broadcast!) I’m not sure how much the added nutrients actually increase standardized test scores — that could also be due to the school’s better teacher recruitment and retention in the last one or two years — but I’m sure it’s helping out the students who arrive at the school malnourished or the students who, like the story points out, ate a steady diet of instant noodles. 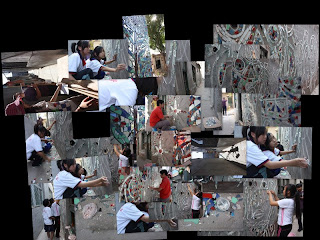 One of my favorite things about the Dandelion School is that it’s covered in murals and mosaics designed by students. Without the artwork, the school would be a drab collection of cement buildings surrounding a cement courtyard.

This week, artist Lily Yeh was at the school continuing her work with the Dandelion students on tile and mirror mosaics in a narrow path that leads to the library and more classrooms at the back of the school. She has helped the students transform the school into a work of art and has worked with them to write about their journeys through China and about their hometowns.

The students work on the mosaic in groups of 10 or so, and then rotate with their classmates. When I walk to the library, I dodge 13-year-olds smashing mirror and tile on the ground to attach to the wall. (The boys enjoy smashing the mirrors so much that I’ve started to wear closed-toe shoes to protect my feet from flying glass.)

A good blog post by James Fallows about June 4th in Beijing. I wouldn’t know what’s going on there anyway, since I live about one and a half hours away from Tiananmen by public transportation.

In October I decided it was time to take the GRE and apply to graduate school. I am mercifully in the decision making portion of a long test and application process that ate up much of my time during the fall semester. I thought registering for the GRE would be easy; after all, the university students I taught in Hangzhou in 2004 were all taking the GRE to try to get into graduate schools in the United States. It couldn’t be that difficult to register for the test in China.

But, as things sometimes are when you live in Asia, it was quite difficult. First I registered for the test in Hong Kong because the Nanjing registration deadline had already passed. I soon found out that I could only take part of the test in Hong Kong, the essay portion, and would have to wait until May to take the rest of the test. That was just too late. By May graduate schools would have already decided on their incoming class. So I did the next best thing I could think of: I registered for the test in Manila, where I could take the full GRE in one four- to five-hour sitting. I could have gone to Bangkok to take it, but figured I could wrap in a long weekend with friends in the Philippines.

Why is it so much easier to take the GRE in Manila or Bangkok than in China? Cheating. And it’s not just cheating on the GRE — it’s every test you can think of. According to a brief in the New York Times about SAT scores being cancelled in South Korea (apparently China isn’t the only country that keeps ETS test writers up late), in the early 90s around 10,000 TOEFL test scores were cancelled in China because of cheating.

For those of you who teach or have taught in China, this comes as no surprise. I often devised complicated methods for preventing cheating during midterm and final exams. In my writing classes I learned (the hard way) to take in-class writing samples from my students to make spotting plagiarism a little easier.

I’m not quite sure why the Philippines isn’t also blacklisted by testing services. Last year the Philippines’ nursing board exam was leaked. Forty-two thousand potential nurses had taken the test, and around 17 thousand passed. Some thought candidates should retake the test; others did not think it was necessary. But perhaps the Educational Testing Service, the gatekeeper of the GRE and SAT, among many other tests, had not had many problems in the Philippines. Or if they did, perhaps it’s a question of volume: I would guess that the number of Chinese students taking ETS tests far outnumber Filipino students.

Still — like the DVDs that make their way to a Chinese pirating company well before it leaves theaters — copies of standardized tests always manage to make their way to Asia, and no doubt other enterprising students around the world. Cheating students definitely keep ETS test writers employed. In an attempt to stay ahead of the curve, they’re probably writing multiple tests each month, and, not surprisingly, being beaten at their own game by the students they’re supposed to test.